Please register and send your application video to education@suzukimn.org before this deadline. 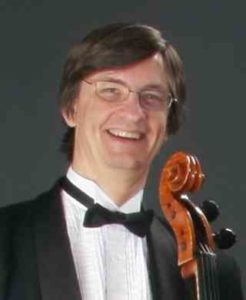 David Holmes grew up in Texas, but has lived in Minneapolis since 1993. He holds a Bachelor of Music degree from the University of Houston and a Master of Music and Doctor of Musical Arts degree from the University of Kansas (1993). A Suzuki teacher for 25 years, David has been a guest clinician at over 50 Suzuki institutes across the country and has presented at the Suzuki National Conference twice. He was awarded the Master Studio Teacher Award in 2014 from the Minnesota String and Orchestra Teachers Association (MNSOTA). As a columnist for the award-winning MNSOTA Journal for the past 10 years, David has published numerous articles on cello pedagogy. He also has been published in the American String Teacher’s Association (ASTA) journal and the Wisconsin Cello Society Newsletter. David taught at the Augsburg College Suzuki Talent Education Program from 1994-2014 and is currently teaching at the North Star Cello Academy. David is cellist in the Northern Lights String Quartet, is an artist member of Thursday Musical, has been principal cellist of the Minnetonka and Bloomington Symphonies, and has performed with the Minnesota Opera Orchestra.

The masterclass will be open to the public. First students to register will be the first to be considered for participation in the masterclass.

If you are selected to participate in the masterclass, a fee of $25 will be assessed with registration.